JUNE 7--A Florida woman on a booty call quest showed up at her ex-boyfriend’s home early yesterday morning and, upon discovering another 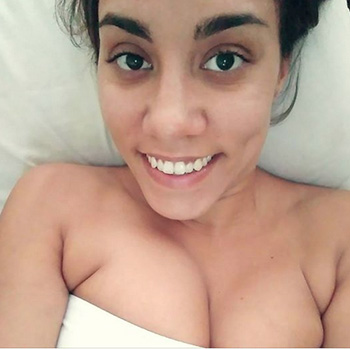 woman in his bed, began pummeling the female victim in the head, according to police.

Cops say that Krystina Joy Rivera, 27, had been sending her former beau “text messages...about wanting to come over and having sex.” Rivera’s ex, however, “did not acknowledge the text messages,” investigators noted.

Rivera, seen at right in a Facebook photo, proceeded to the man’s St. Petersburg residence around 5 AM and somehow “forced her way into” the home via the closed front door. At the time, Ronald Koch “was lying in bed” with girlfriend Julie Thomas.

Police allege that Rivera, “without saying a word,” walked into the bedroom and began repeatedly punching Thomas in the face. Thomas, a criminal complaint states, was left bloodied and with “minor injuries to her face” as a result of the attack.

During a police interview, Rivera denied assaulting Thomas, and claimed

that she was “invited over to the residence.”

Rivera, a Clearwater resident and mother of two, was arrested at 6 AM on a felony charge of burglary with assault or battery (for which she has pleaded not guilty). Rivera, locked up in advance of a June 13 bond hearing, has been ordered to have no contact with Koch or Thomas.