From gym bros to dick pics, I gave the guys of Tinder a taste of their own medicine.

Men on Tinder manage to be awful in a myriad of different ways: from city boys blabbing about getting you into cool clubs for free because they "know the bouncers" to gym bros describing their biceps like they were works of art. What's consistent, however, is the confidence—that DM-sliding, dick pic-swinging swagger that knows no boundaries, nor anything about what women find attractive.

Still, I don't think it's fair that guys get to take on these gross dating personas. What would happen if women spoke to men in the way they speak to women? Never afraid of tackling the big questions, I logged onto the app to find out.

Safeguarding my conscience, I steered clear of male nurses or anyone working for an NGO. Everyone else was fair game.

Tinder is swarming with semi-nude men who look like they just finished a dirty motel webcam session. In order to bypass the app's censorship regulations, they've normally packed it into a pair of tight sweatpants, and are experts in using low-angles, mirrors, and trick photography in order to reveal just enough and then a little bit more.

Basically, the dick-pic crew wants quick sex and is very upfront about that, so when I spoke to these guys in their own language ("wanna play" lines + eggplant emojis), many of them proved, predictably, up for getting their burrito into my taco: 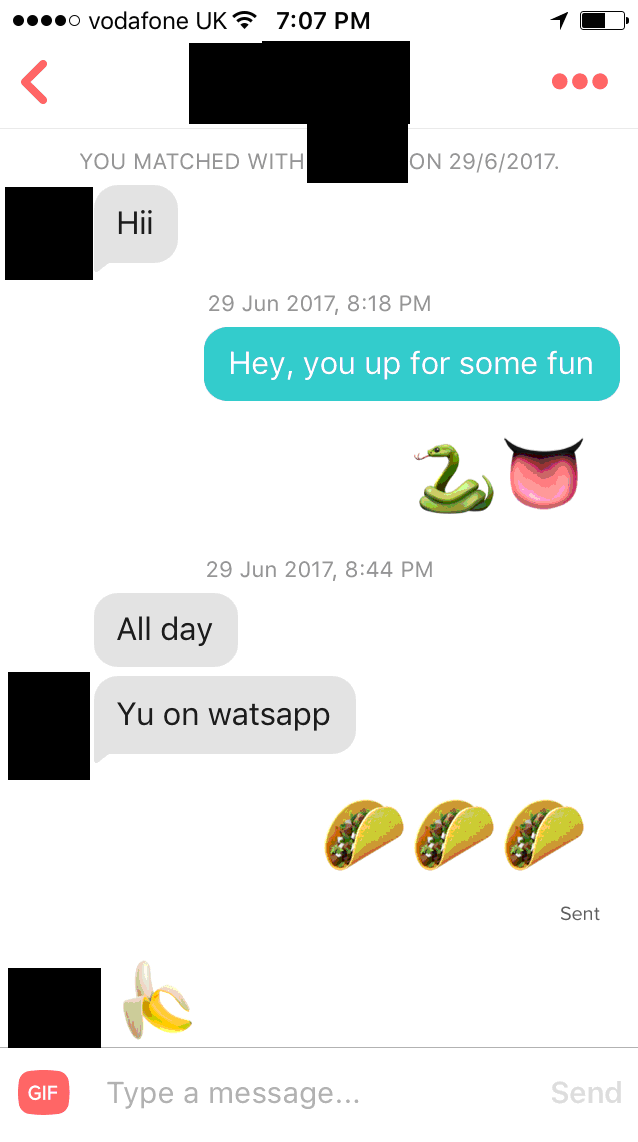 Others, however, struggled with my pungent, meaty metaphors—perhaps a telling indication that coming from a girl, unsolicited sauciness is far less accepted: 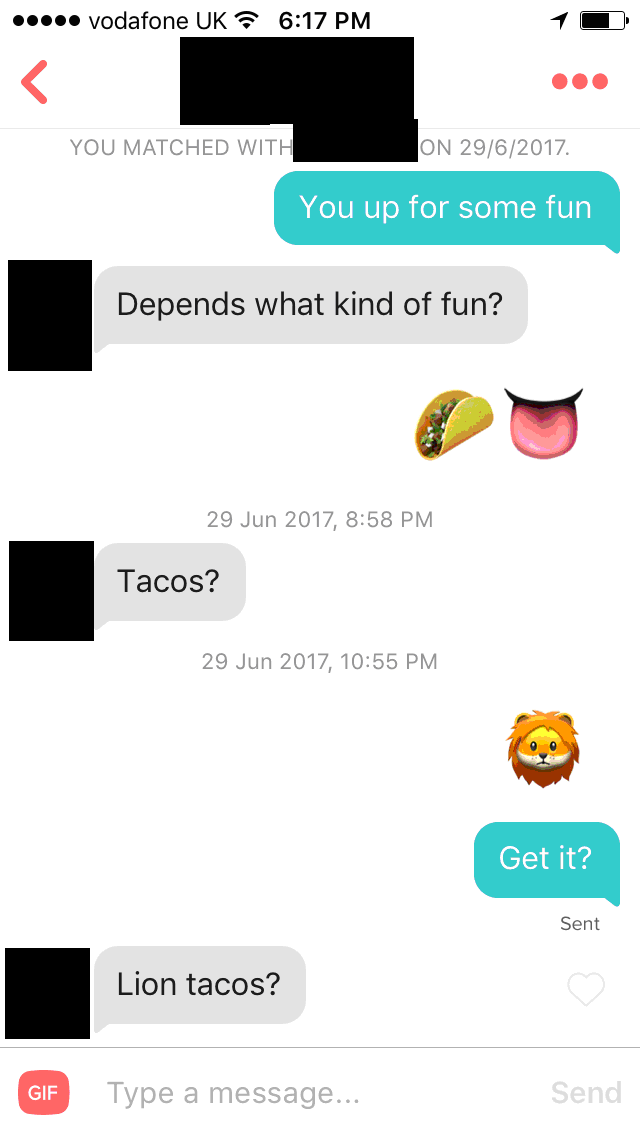 Or maybe they were just stunned by my breathtaking Tinderotica: 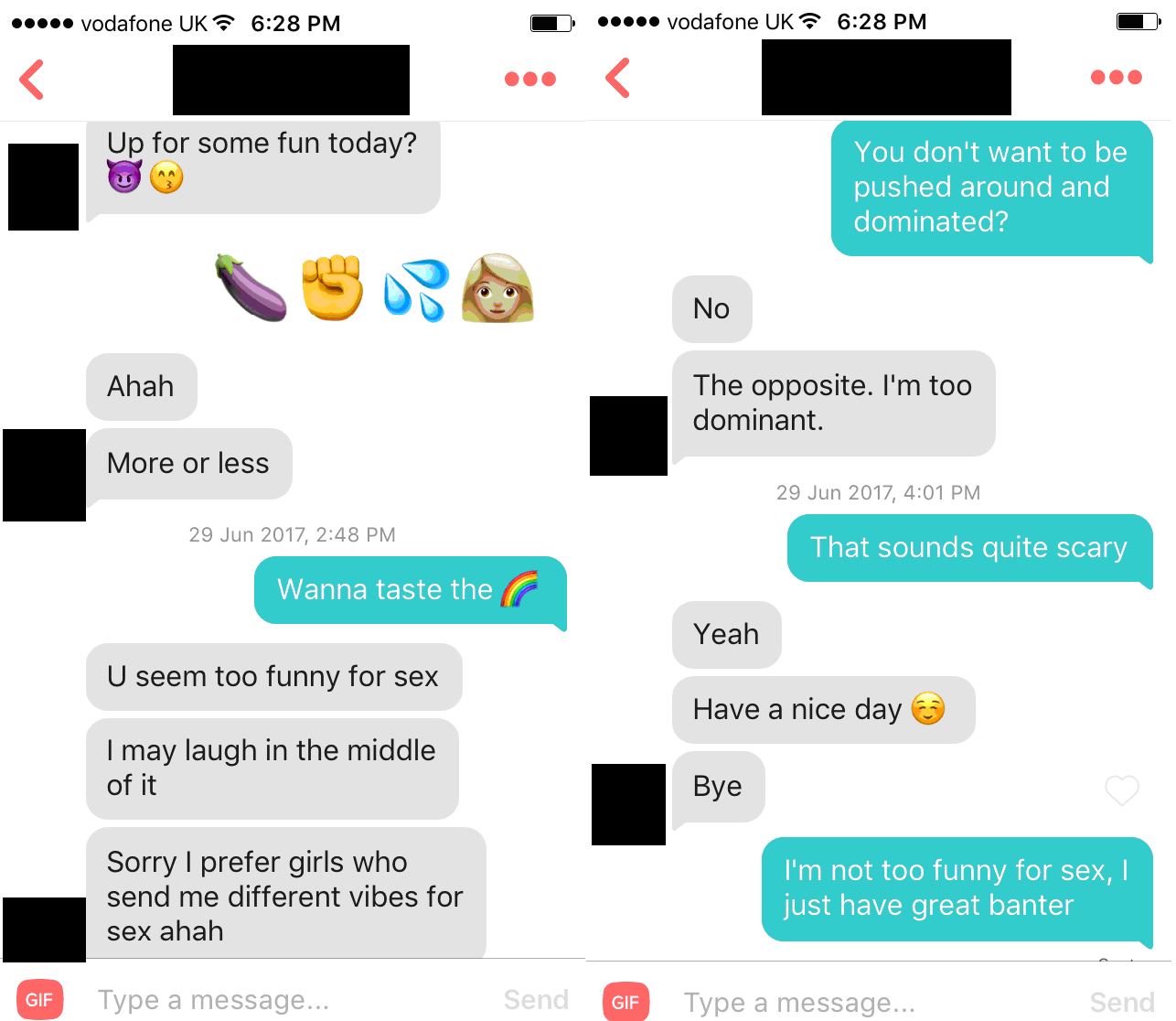 All it took was four suggestive emojis for this daddy to abandon me completely: 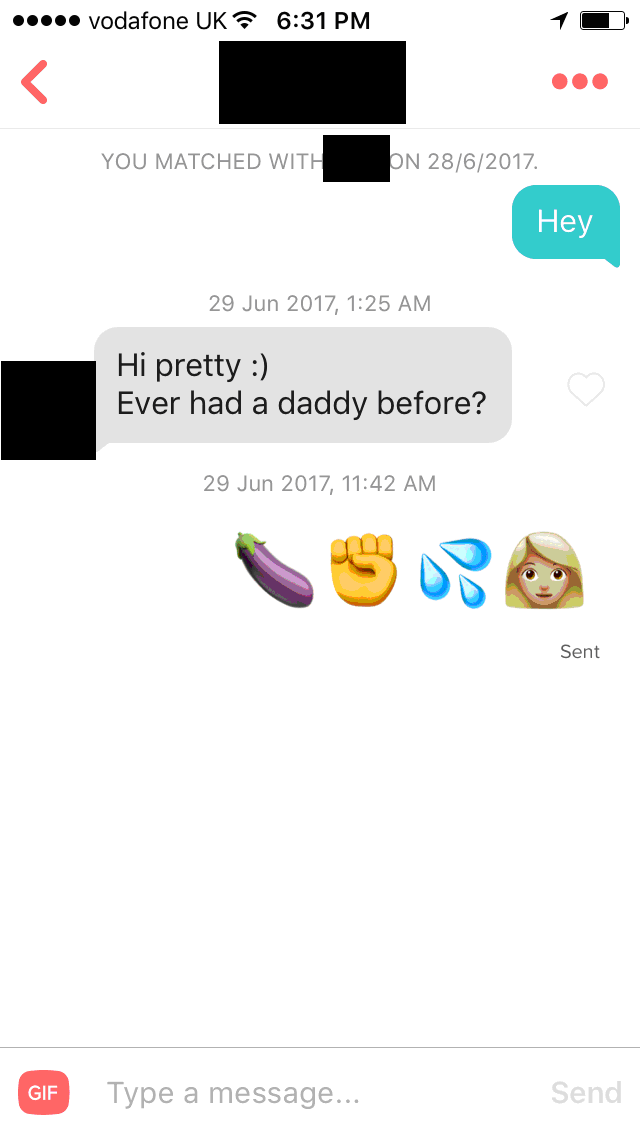 The blank space is deafening, daddy. 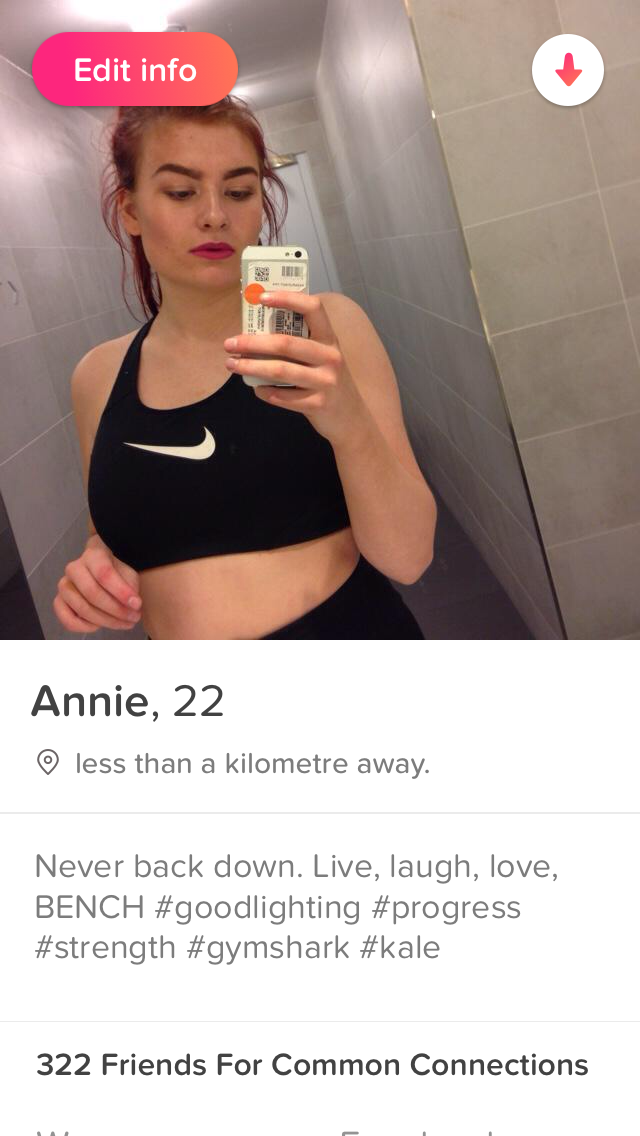 My dick swinging left me without a date, so I went to the next rung down on the ladder of shameless exhibitionism. Gym rats might be building their bodies into unstoppable fuck-machines, but they aren't looking to have sex necessarily. Their day is a strict regiment of chest presses, bowls of chicken, and brown rice—there's very little time for actual sex unless it's so rigorous it counts as cardio. Given the complex jargon these people use, I knew adopting the gym bae voice was going to be a real challenge, but I was up to it. After swiping past a number of sculpted men holding anything from large trouts to ex-girlfriends, I found my first catch: 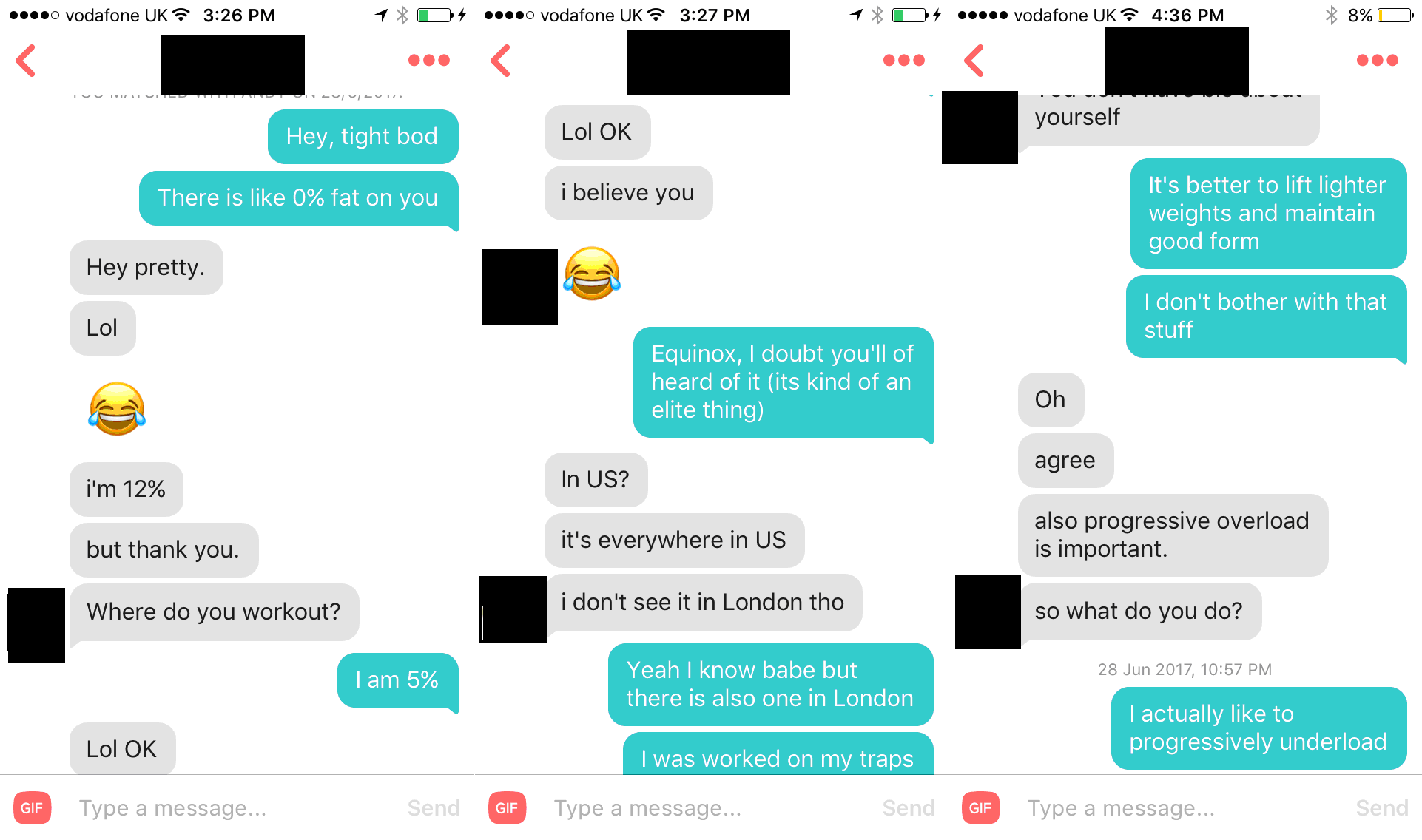 I couldn't believe it. Gym bae bought it, graciously lapping up my lies like strawberry whey powder. Whether it was because he got to quote his body fat index, or because he's just desperate for casual sex, it was working. Most of the other benchwarmers were into me, too: 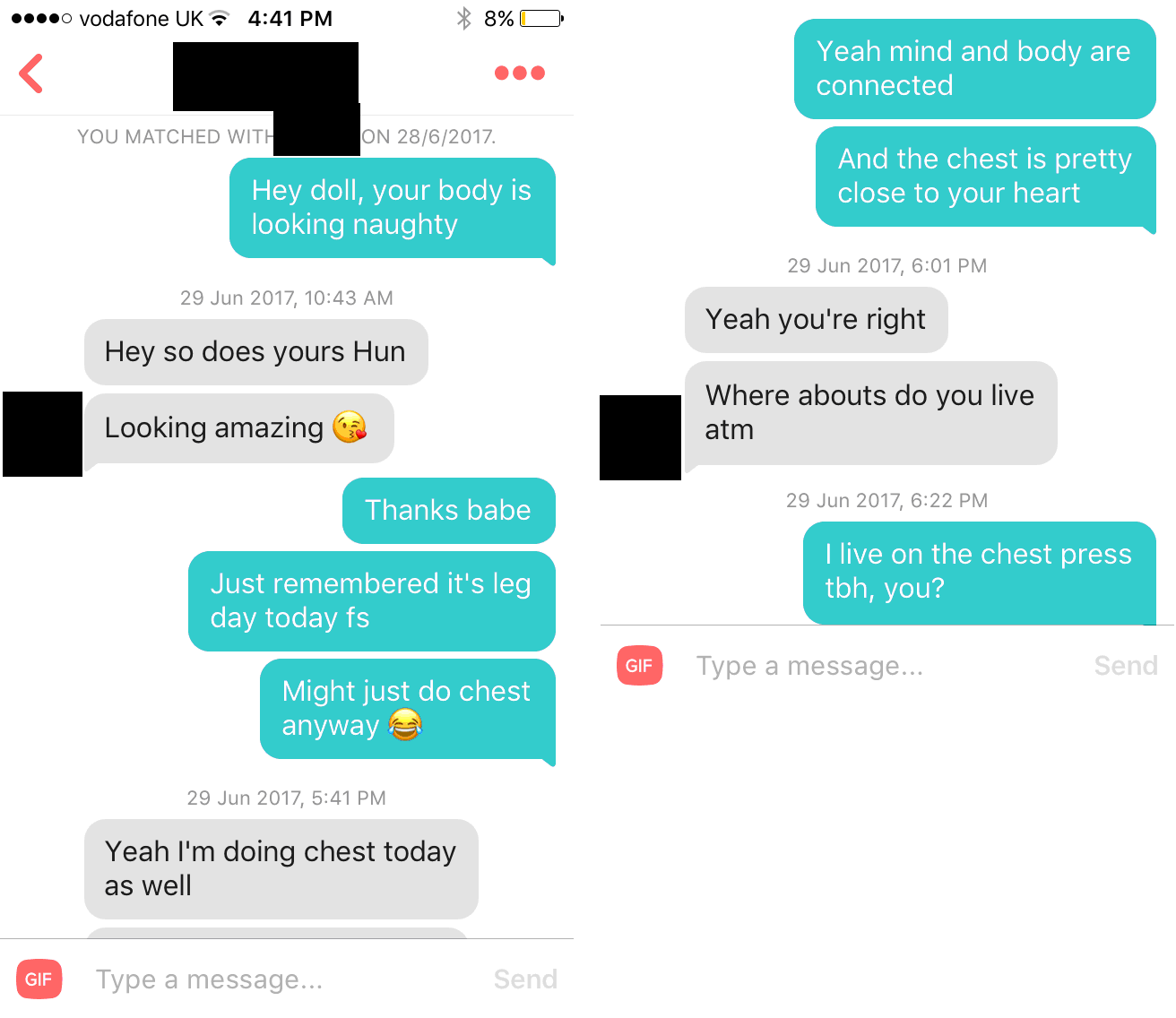 Despite the inch of cellulite smothering my body, none of the men called me out. Even if you don't know what an abdominal oblique is, you can just pretend you do, and men will still have sex with you. Oh, except this guy: 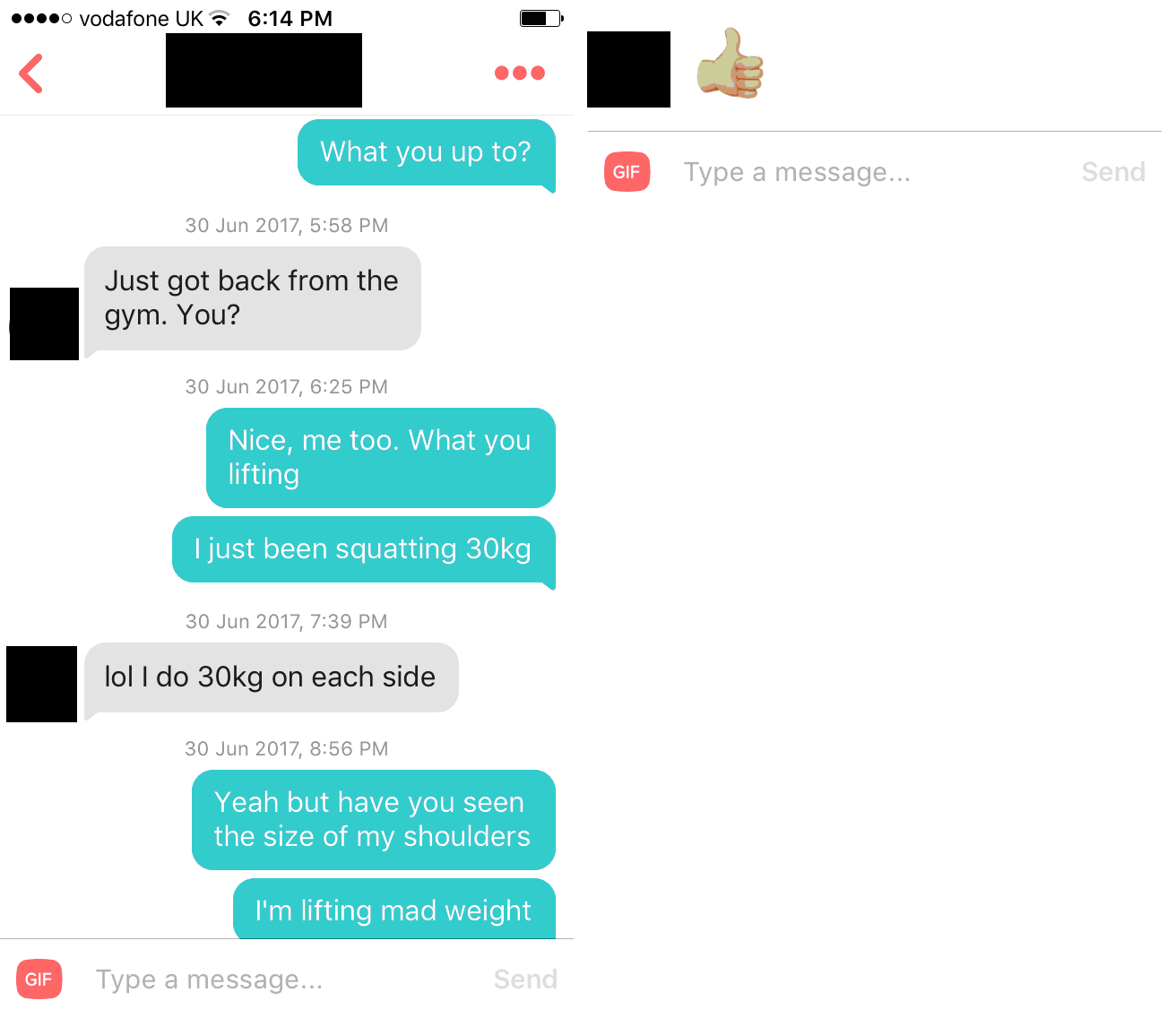 When they're not handing out vouchers, club-night promoters and guestlist recruiters are on Tinder. In a way, the skills required for dating and club promoting are very similar, except this time instead of trying to convince people to spend an evening watching Tinie Tempah's tour DJ, they are convincing women to do stuff to their penis.

The first promoter I spoke to had a bio that read "living in Soho center of London"—a deeply concerning sign that the housing crisis has reached the point where postcodes make good pick-up lines. His main picture showed him wedged between two table dancers in matching promo leotards, instantly marking him as the type to sit bored out of his mind in segregated VIP areas sipping free bottles of 4 percent champagne. Was he, however, going to be bored by a taste of his own medicine, as I became Guestlist Bae? 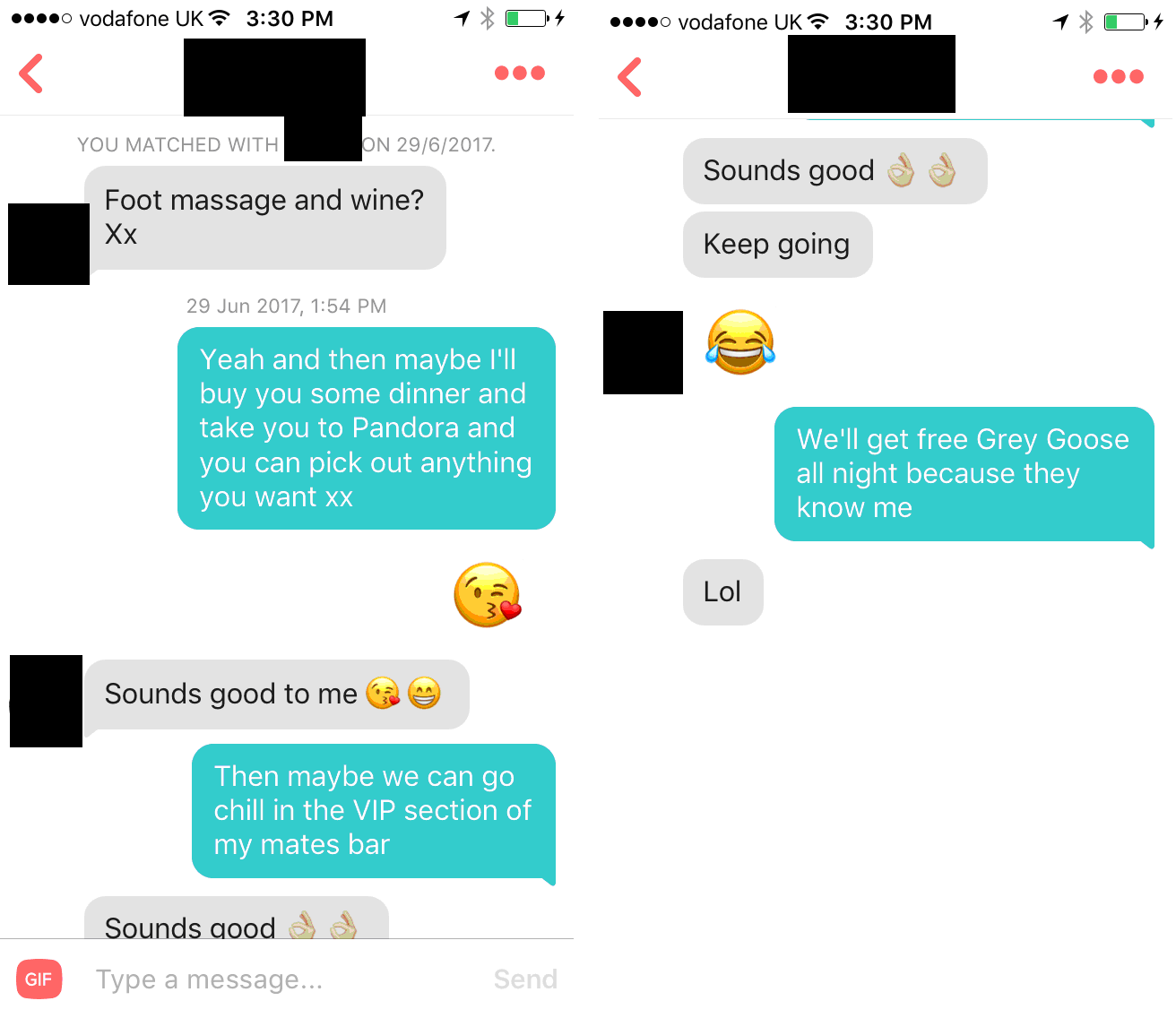 Despite talking like an "I Only Fuck DJs" starter pack, most of the DJ Khaled acolytes continued to entertain me. At no point did they dismiss my offers of free booze as unbearable. Success! 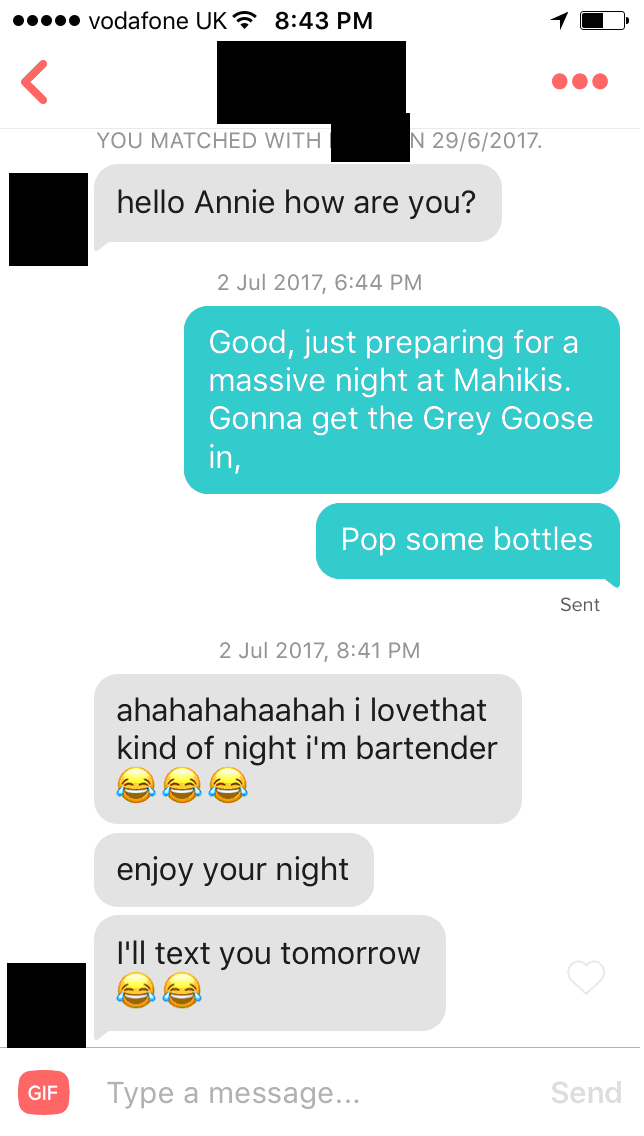 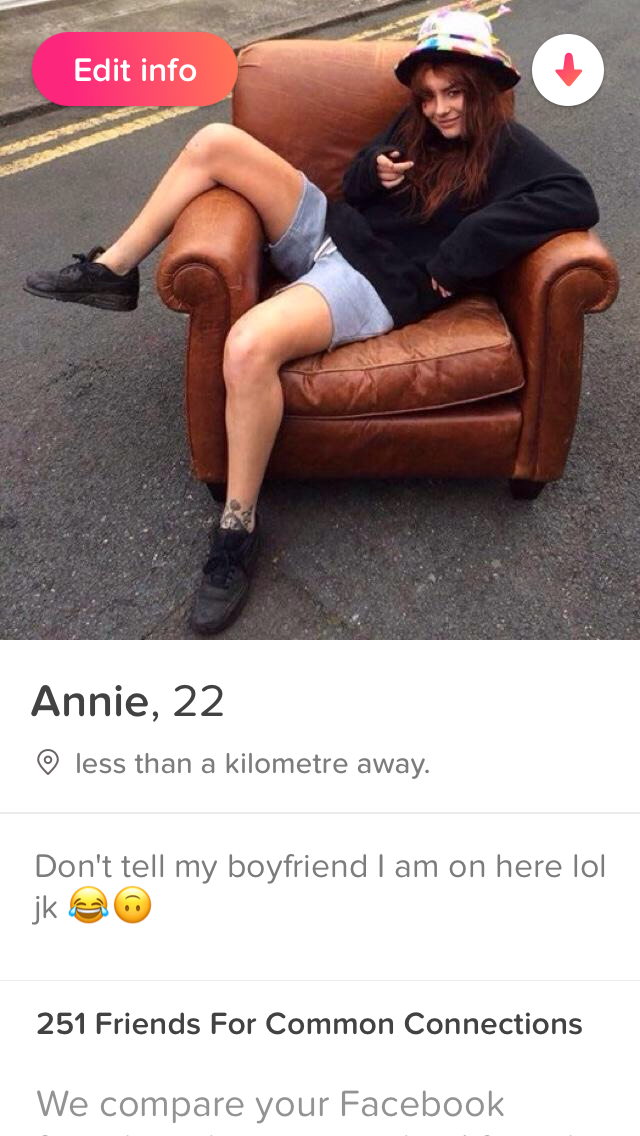 Some guys are completely incapable of flirting, so instead they have developed a foolproof methodology in the guise of ironically bad pick-up lines. These are the boys who think the way into a girl's pants with corny banter, and then include a photo of them in a T-shirt that reads, "The Man (up arrow) The Legend (down arrow)." Yes, they want to have sex with you—but only if you have got good banter!

Upon seeing a photo of a 34-year-old man posing with the Harry Potter, Platform Nine and Three-Quarters installation, like a French tourist on a school trip, I revved up the banter bus and prepared to roast him: 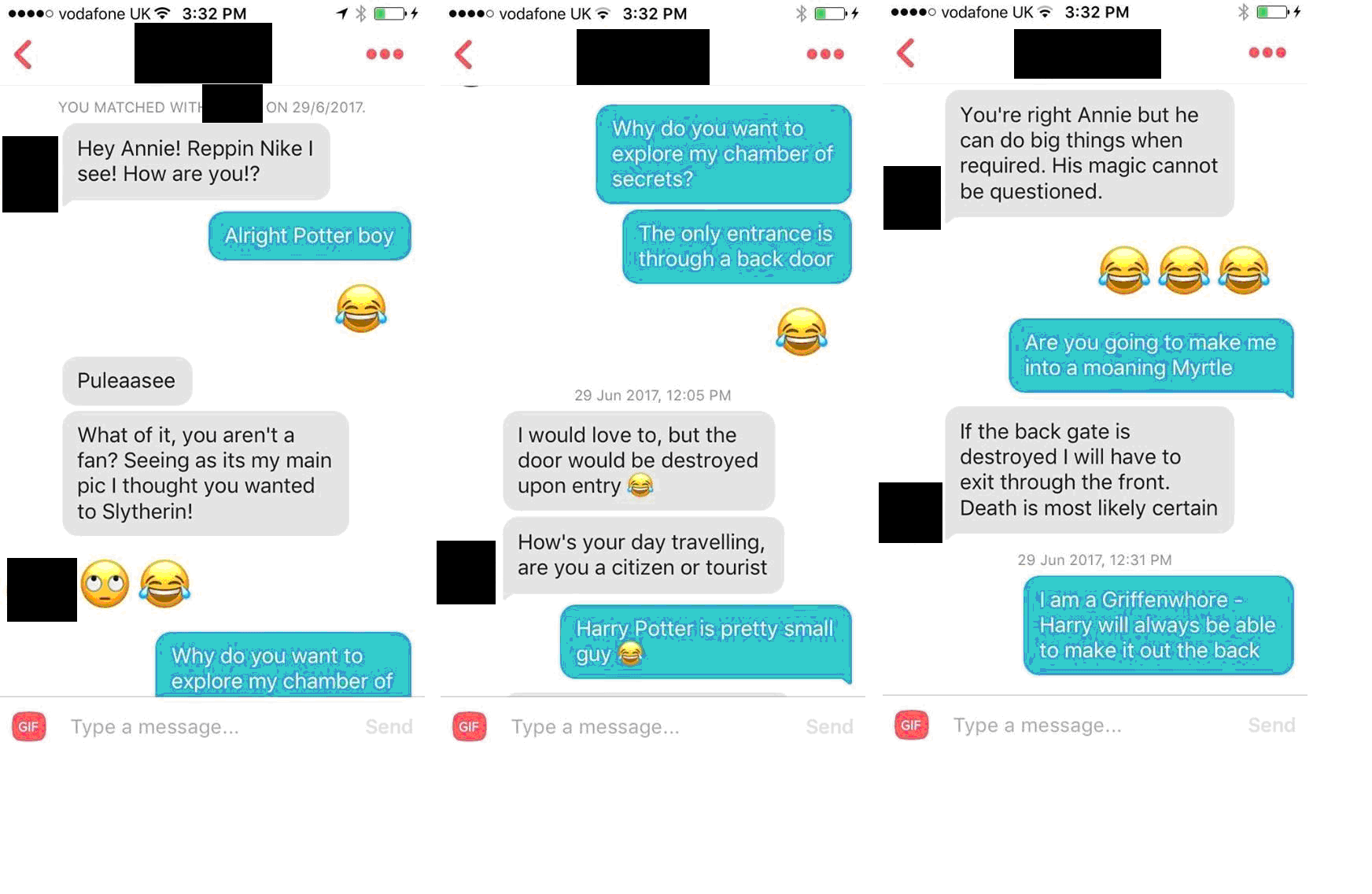 Initially, I thought we were getting somewhere, but given the bottomless black hole of irony, metaphor, and innuendo, I soon realized the only action I was going to get out of this was a feature-length script for a Harry Potter spinoff film.

Woke bae is the type of guy to wear a "This Is What A Feminist Looks Like" T-shirt in his profile picture. He cares about gender equality—it's a good mechanism for getting girls. Emma Watson's #heforshe campaign exists in his brain as #heforhookingup. Woke bae's bio reads, "Swipe left if you are socially conservative." He instagrams himself reading Caitlin Moran books. You get the picture.

Despite all my hopes that out-woking Tinder's woke baes, but honestly I struggled to "stay woke" for long enough to really make an impact. 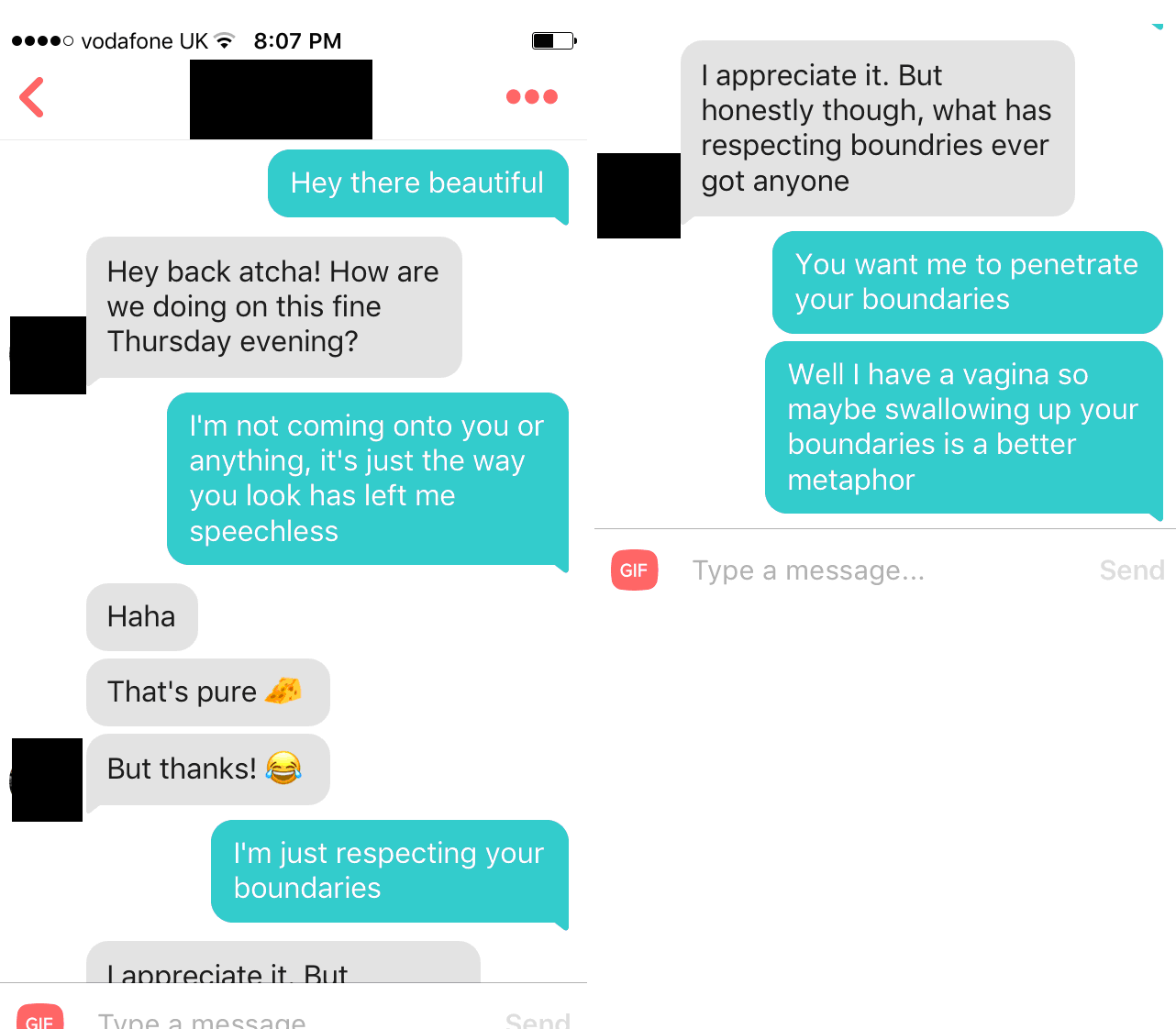 Woke bae will respect your boundaries, but just so you know... he doesn't have any. 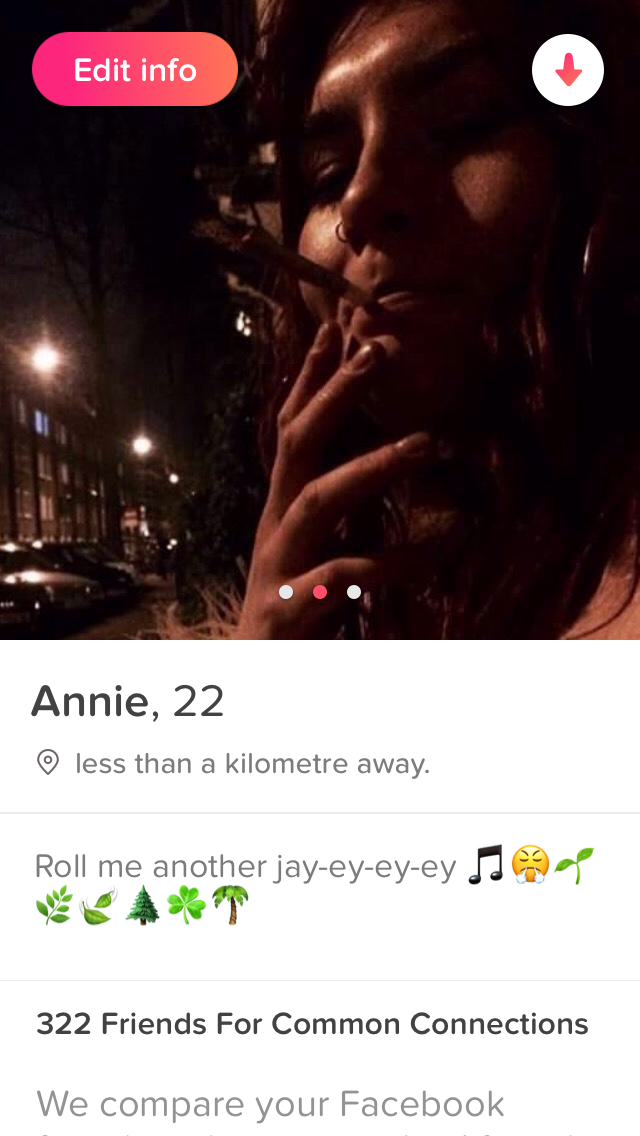 For my final trick, I decided to go for the most laid-back of Tinder's lover boys. Weed baes want to get laid, but preferably preceded and succeeded by a big old lovely joint. Over-confident, ganja fuckboys love the devil's lettuce, but apparently, what they love even more is girls who speak their language: 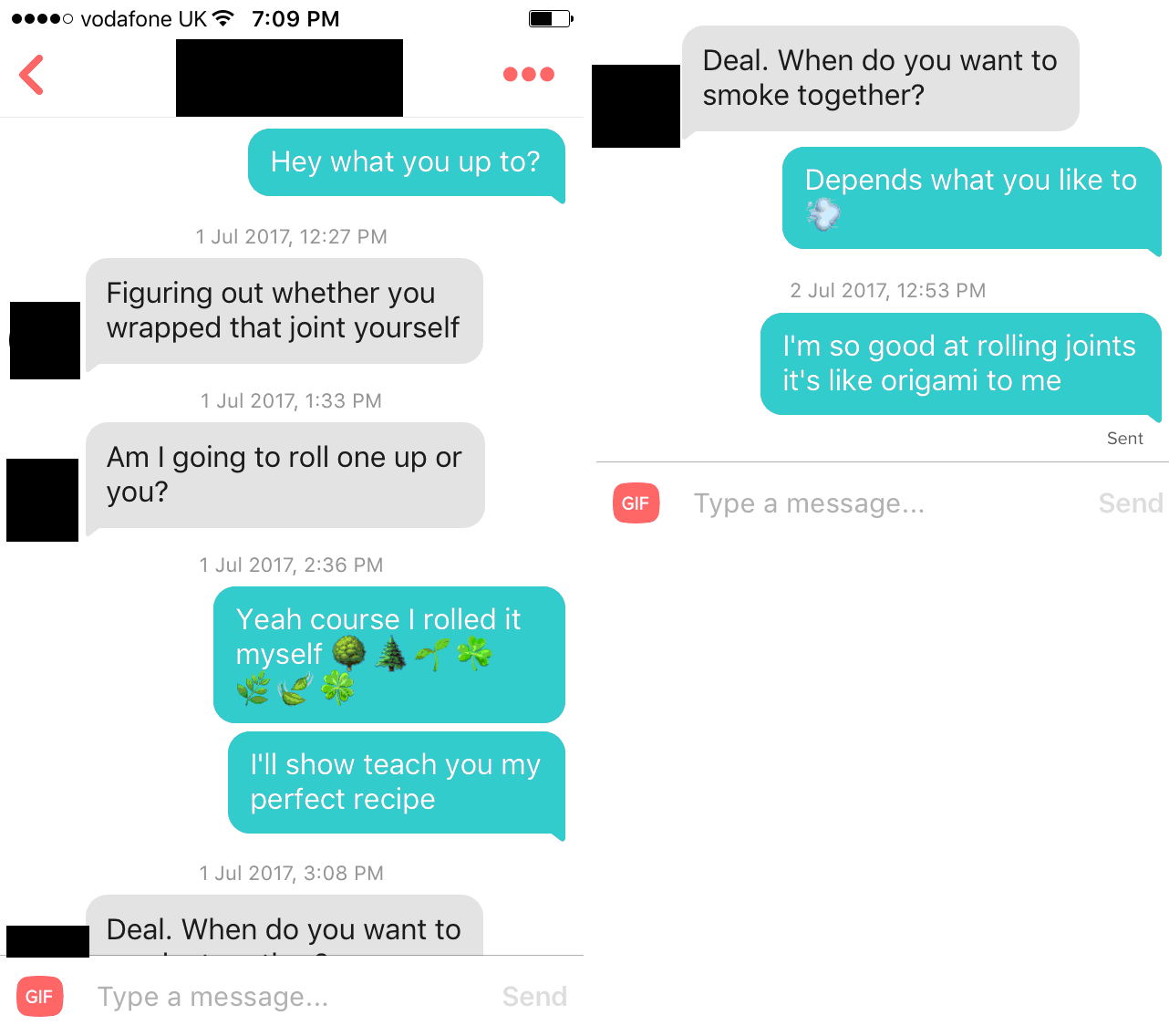 I was convinced the origami comment was pushing my luck, but the kush crew kept lapping it up. I was smoking: 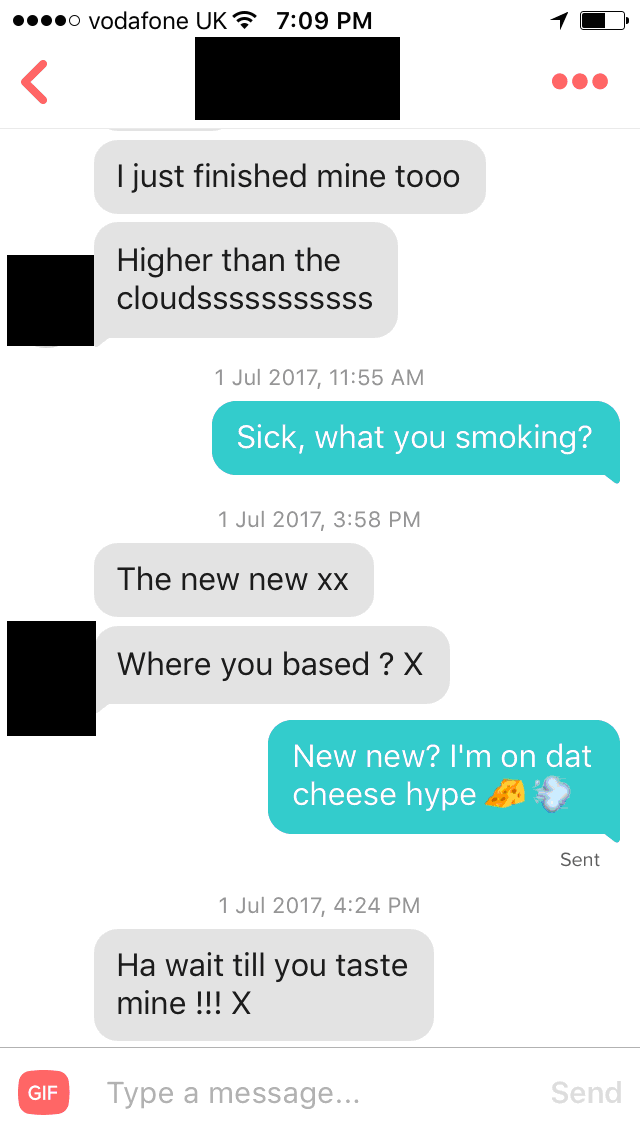 I ended all my Tinder conversations at once with a copy and paste, convoluted message about getting back with an ex-boyfriend. I doubt my matches were particularly upset, but I didn't want to take the Tinder dickhead character to the point of stringing people along for sex and then going silent—I'm not a method actor.

If being a macho asshole taught me anything, it's that dudes respond pretty well to their own game. I think they found reverse mansplaining attractive. Maybe this experiment proves something really important about egocentrism and attraction. More likely, I could have shat in a bucket and transcribed the sound it made, because most guys will agree with anything in the hope of a date.