Be careful how you eat it, though. 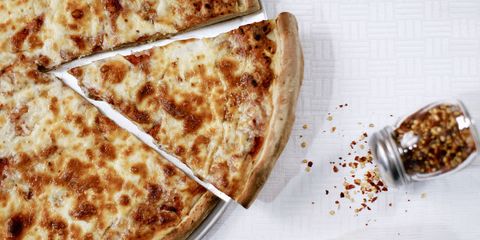 People are creatures of habit after a one-night stand. According to a recent Yelp survey of single Millennials, pizza is the preferred late-night meal after a hook-up, which all but confirms pizza is the best snack food, sex or no. Tacos came in at a "distant second."

The survey also found that 46 percent of singles are more attracted to their one-night stand if he or she is "into certain foods," per Today. The best food for snagging a second hook-up (or first date) was pizza, again, followed by ice cream, pasta, and tacos.

The caveat to all this is that only one in three survey participants thought it was okay to share a meal with a sexual partner after a one-night stand, and only if that meal was casual takeout or delivery—i.e. no formal restaurant dates. And the most serious turn-off for those who did stick around for a quick bite was when the other person was a loud chewer, or an open-mouthed chewer. That crime was more offensive than "gorging" on junk food or drinking too much alcohol.

So if you're famished after one-time sex, order a pizza—which you were probably going to eat regardless if your hook-up partner stuck around—and eat it like a civilized human. Easy enough.