Clowns Are Reportedly Losing Work Because of the New It Movie

Sad news for all non-creepy clowns.

As the air gets crisper and crisper, movie theaters also start to chance, as more and more horror films vie for a chance to be the year's Halloween crown jewel. It, based off of the classic Stephen King novel and previously adapted into a miniseries, is one of those horror contenders. But its subject matter — creepy clown terrorizes small town! — is, alas, giving real clowns an even worse rap. 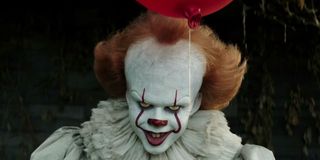 Moody herself is a clown who works to educate children about fire safety as Sparky the Firefighter Clown. And she has harsh words for the story's perpetuation of anti-clown sentiments: "People had school shows and library shows that were canceled. That’s very unfortunate. The very public we're trying to deliver positive and important messages to aren't getting them."

As for King's response to the matter? Well, he made his stance clear all the way back in April: "The clowns are pissed at me. Sorry, most are great. BUT...kids have always been scared of clowns. Don't kill the messengers for the message."