Man protests at court over pot, bong seizureNEWS 07:30 AM by Gordon Paul  DurhamRegion.com 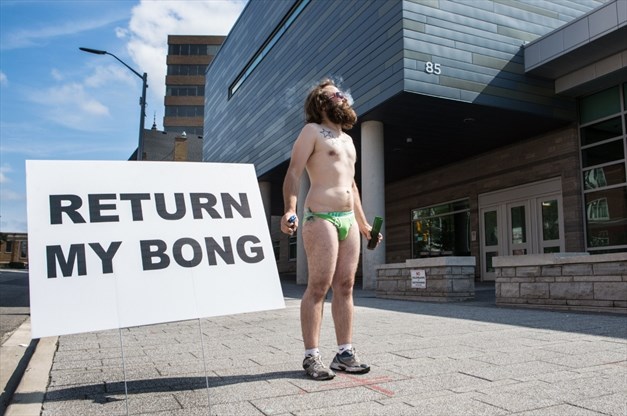 KITCHENER — Well, that's one way to get attention.

A man wearing shoes, socks and skimpy green underwear — and nothing else — protested Tuesday morning beside the Kitchener courthouse while smoking a bong.

Beside him, next to busy Frederick Street, were two signs: Return My Bong and Return My Marijuana.

Jeffrey Shaver, 31, of Cambridge makes an unconfirmed claim that Waterloo Regional Police wrongfully arrested him for possession of marijuana last October. He says they seized his bong and a small amount of pot — and he wants them back.

"I have a legal medical marijuana card. Five months after I got it, I was arrested for possession of marijuana, but I had my card on me," Shaver said.

"So two days later, I went back and smoked marijuana on the front lawn of the police station," Shaver said. "Again they arrested me. I went to jail for the first time. They held me there for 16 hours.

"And that charge, ironically, has already been dropped and this is the very bong they returned to me," he said, pausing to take a hit off the bong. "They refuse to return the other one because they haven't dropped that marijuana charge."

Shaver said he smokes pot to treat anxiety, depression and back pain. The arrest in which his stash and bong were seized happened at Cambridge Memorial Hospital, he said.

"I was having a panic attack and I was brought there and I had an issue with the vending machine and I was charged with trespassing and causing a disturbance by yelling," he said. "They asked me to leave. Police arrested me and searched me."

Shaver, who has previously protested in Cambridge, said he got plenty of support from passersby and motorists along Frederick Street in Kitchener.

"Lots of people honking their horns, waving at me. It's been mostly positive."

But at least one pedestrian suggested he put on some pants.