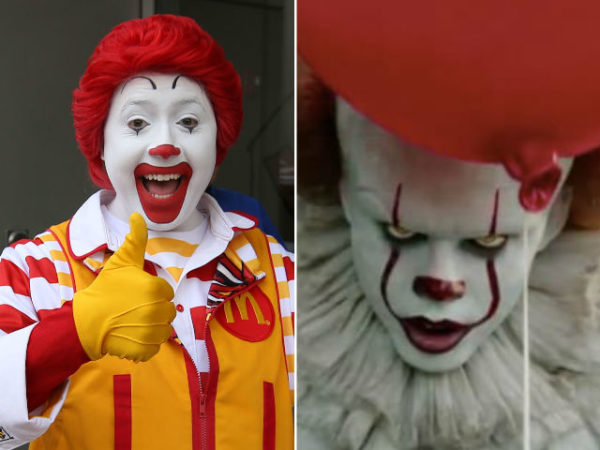 If you have coulrophobia – a fear of clowns – anyone in a wig and face paint with a red nose is terrifying. Maybe that’s why Burger King’s Russian operations seem to be a little confused by two very famous clowns.

On one end of the spectrum, there’s Ronald McDonald: The mascot of their fast-food competitor is well-intentioned and benevolent (but still a little bit creepy in the way that all clowns are creepy). He looks like the guy in the Waldo shirt, waving to children while delivering merriment and Happy Meals.

On the other side, there’s Pennywise, the villain of Stephen King’s “It,” which was just rebooted in a resounding box office success.

But Burger King Russia has filed an official government complaint to the Federal Anti-Monopoly Service demanding the film be pulled from theaters because – inexplicably – they think that Pennywise’s supposed resemblance to Ronald gives McDonald’s an unfair advantage. Yes, they think a clown that terrorizes children in a horror movie is driving customers to their competitor.

The idea that McDonald’s is benefiting from Ronald’s resemblance to Pennywise is, of course, laughably misguided. After a spate of creepy clown sightings around the world last year, McDonald’s cut back on appearances for its mascot, which they told the Associated Press was an attempt to be “thoughtful in respect to Ronald McDonald’s participation in community events” as a result of the “current climate around clown sightings in communities.”

And you can bet McDonald’s isn’t happy about a parody trailer for “It” that stars Ronald McDonald instead.

“It” opened Sept. 7 in Russia and has grossed $14 million in the country so far, according to the Hollywood Reporter. Meanwhile, Burger King has been making a big push in the Russian market, and has introduced a new cryptocurrency, WhopperCoin, for Russian customers. The “It” complaint was first reported by the Russian publication Vedomosti.

Newsweek reported that Andrey Kashevarov, deputy head of the FAS, told publications, including Russian news agency Ria Novosti, it was not concerned with the content of the film because the “author of the script [and] the director” have their own “artistic perception” of the Pennywise character. One that presumably doesn’t involve adventures with his friends Grimace and Mayor McCheese.