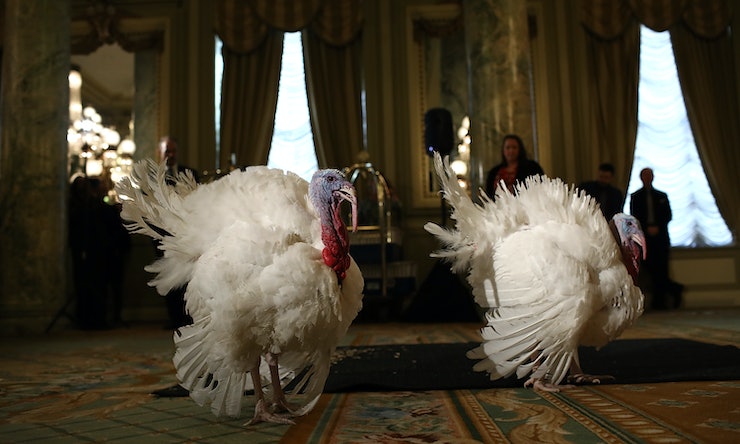 Before President Donald Trump can begin his Thanksgiving holiday, he'll have one last duty to complete: the presidential turkey pardon. Trump is scheduled to carry on the White House's time-honored tradition Tuesday by pardoning a  special turkey during a ceremony in the Rose Garden. But before the two turkeys selected for this year's presidential pardon have their moment in spotlight, they're enjoying a taste of the good life with a stay at a luxury four-star hotel.

On Sunday, the White House announced the two turkeys' arrival on social media, sharing photos of the birds checking in to their room (yes, they get their own room) at the Willard InterContinental Hotel in Washington, D.C. In photos shared to the White House's official Snapchat and Instagram accounts, the birds looked quite at home on two of the hotel's plush beds.

But the birds' special status doesn't earn them free range of the hotel. According to TIME, which documented preparations for the birds at the Willard Hotel in 2014, the turkeys enjoy the foyer of a deluxe room with two queen beds. Members of the National Turkey Federation, which donates the birds for pardon, reportedly "turkey proof" the hotel room for the birds' stay, using folding tables and brown paper as blockades and protective barriers and pine shavings to make the place feel a bit more like home. 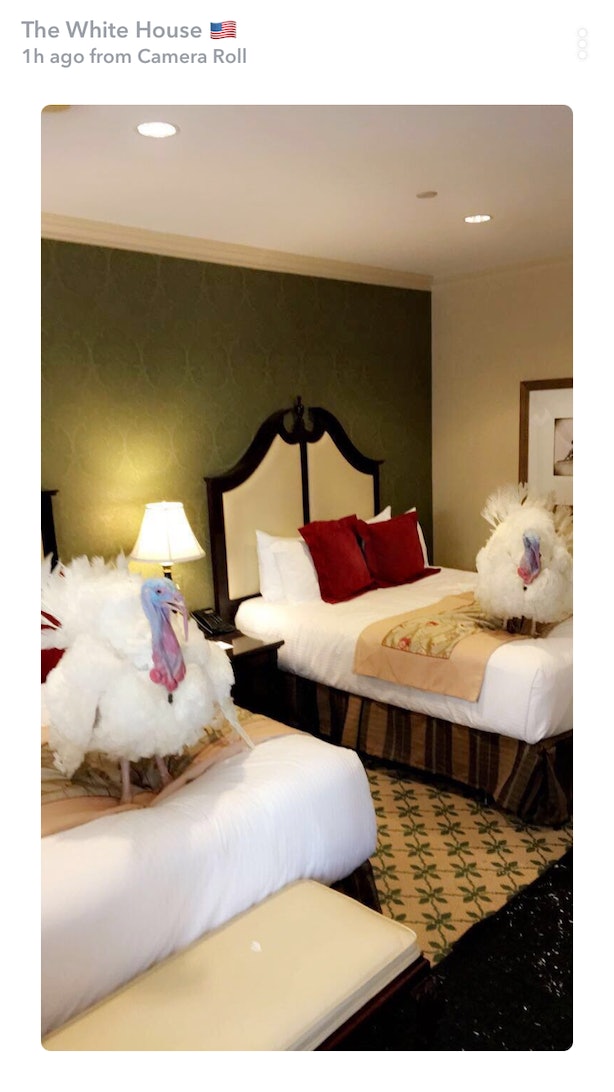 While it's unclear exactly how much it costs to host the turkeys at the Willard Hotel, the average nightly rate for a deluxe room with two queen beds is listed online as $267.75. Along with preparing the room, the National Turkey Federation is also reportedly responsible for footing the bill for the turkeys' hotel stay, a White House spokesperson said in a statement to the Washington Examiner.

The birds are expected to stay at the hotel until Monday, when they'll reportedly be moved to the White House and one of them will be chosen to receive the presidential pardon and meet Trump in the Rose Garden; the other bird will stand by as an alternate in case of emergency. But while only one turkey appears before the president — and the cameras — the pardon applies to the both of them. After the ceremony, the two turkeys will be taken to live out the rest of their days at Virginia Tech University. 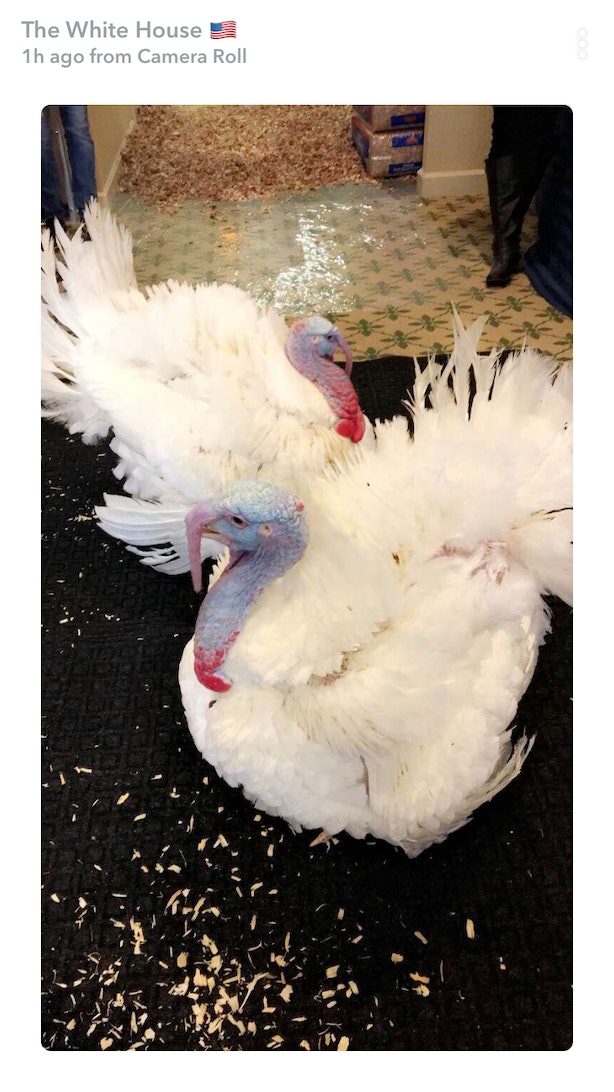 In a statement released last week, the White House said:

After the pardoning, the turkeys will join last year's turkeys at Virginia Tech's "Gobblers Rest" exhibit, where students and veterinarians care for the turkeys, and the public can visit and learn about the university's teaching, research and outreach programs in animal and poultry sciences and veterinary medicine.

This year's birds, which have yet to be given official names, were raised as part of a "presidential flock" in Minnesota by National Turkey Federation Chairman Carl Wittenburg, his wife Sharlene, and five members of the Douglas County 4-H chapter. 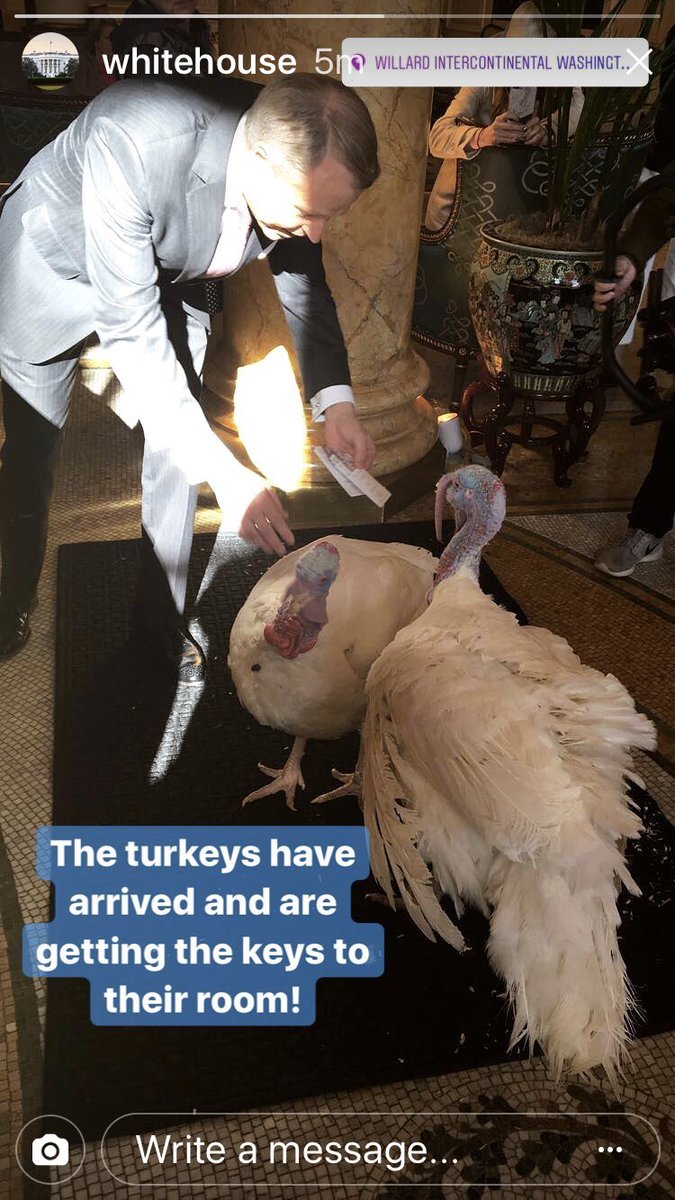 The turkeys have arrived and, according to the White House instagram story, they are staying ... at the Willard Hotel...

The National Turkey Federation has reportedly been providing the White House with a turkey since 1947. However, the turkey pardon tradition carried out by presidents today wasn't started until President George H.W. Bush began it in 1989. Turkeys provided prior to 1989 apparently ended up on the dinner table.

President Trump is expected to head to Mar-a-Lago in Palm Beach, Florida, for his Thanksgiving holiday shortly after the presidential turkey pardon.