9 Reasons You Should Never Drink Fireball

If this if your drink of choice, you really need to get out more.

Oh, Fireball. What an embarrassment to alcohol. The cheap and syrupy cinnamon mixture was made for newbie drinkers and Solo cup college parties and that's as far as it should have made it in the booze scene. Yet somehow it remains a popular order at bars nationwide. But this is wrong. So completely, sadly, and utterly wrong. Sure it might serve its purpose in a big batch Jell-O shot, but if it's your favorite booze, then you really need to sort out your priorities. Because there are more than enough reasons to not drink Fireball.

Actually make that Big Red gum soaked in pee. Just the thought of sipping this syrupy mess is enough to make you gag and start dry-heaving. And these grandmas trying it for the first time agree with me.

2. FIREBALL HAS THE WORST RECIPE IDEAS WITH EVEN WORSE NAMES.

Any drink that ends in "balls" or "nuts" is best left behind. Same goes for the eye-roll–inducing fragile masculinity of the"Man-mosa." And don't even get me started on adding cinnamon to lemonade. Barf.

3. IT'S ALWAYS ORDERED BY THE D-BAGS AT THE BAR.

You know who I'm talking about: the bros with popped-collar Polos and gingham button-ups, finance guys who always cut you but somehow touch your lower back while doing it, sorority girls and college freshmen (with fake IDs, obviously) looking to get plastered on a Thursday night, juice heads bragging about how much they can lift.

The makers of Fireball, Sazerac, are based in Louisiana. So there's no need to use the United Kingdom's spelling of whiskey. But even beyond semantics, the cinnamon drink is hardly authentic, which brings me to my next point....

5. IT'S NOT EVEN REAL WHISKEY.

Fireball is just a hyped up, overly flavored liqueur that pretends to be as badass as the hard stuff. Even Sazerac admits this, filing Fireball under its "Shooters" category and not alongside the rest of the whiskeys it produces.

At 66 proof, Fireball has 20 percent less alcohol than a true whiskey, which typically clocks in at somewhere between 86 and 100 proof.

7. IT ALWAYS LEADS TO TERRIBLE DECISIONS.

No one orders a single shot of Fireball because it's cheap and weak and apparently people like to torture themselves. And so, since it's only ever had in excess, it inspires ridiculously drunk behavior—like peeing in public and starting fights with the bouncer. Hate to break it to you, Fireball, but no good story ever started with "Well, we were drinking Fireball..." 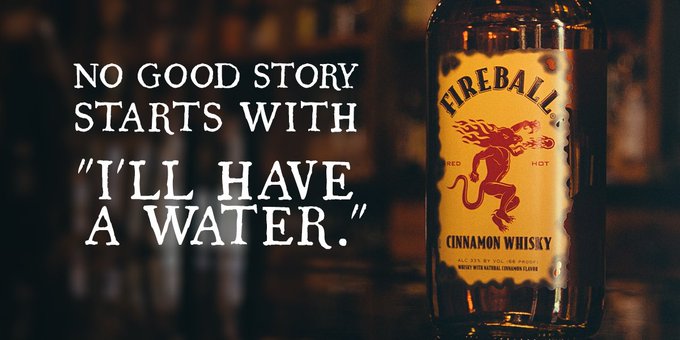 It's #WhiskyWednesday. You know what's next.

8. IT WILL GIVE YOU THE WORST HANGOVER.

Sugar and spice and everything not so nice. The morning after drinking this nasty concoction should be enough to make you quit it for good.

9. IT CONTAINS AN ANTI-FREEZE INGREDIENT.

A fact so unsettling to Europeans that the sickly sweet booze was recalled in Norway, Sweden, and Finland. The chemical coming under fire is propylene glycol, which supposedly enhances flavor by absorbing water, is a slightly less toxic compound than ethylene glycol, which was—until recently—most often used in anti-freeze.